Learn Grace based healing with Presence: The original mystery school

More than just an amazing healing system the Golden Ray will assist your Presence practice and help you stabilise your Awakening into Enlightenment. It gives you another skill set to use, that of energy awareness and its use. The Golden Ray is the spiritual/esoteric aspect of the Laws of Grace. It assists with developing your inner acuity (for evidence gathering). Golden Ray practices also help develop your consciousness of your esoteric bodies. It is standalone but closely linked with the Laws of Grace hence in the Golden Ray course each video is a Presence practice session. Discounted coaching is included in the price to assist you make the most of the course.

Presence is the golden key to being good at working with healing energies. Golden Ray goes deeper than most healing systems as it is hard-wired into your spiritual make-up and esoteric structures that make life possible. Watch the below video that is filled with Grace by the wild birds and their actions. This is a truly magical video! 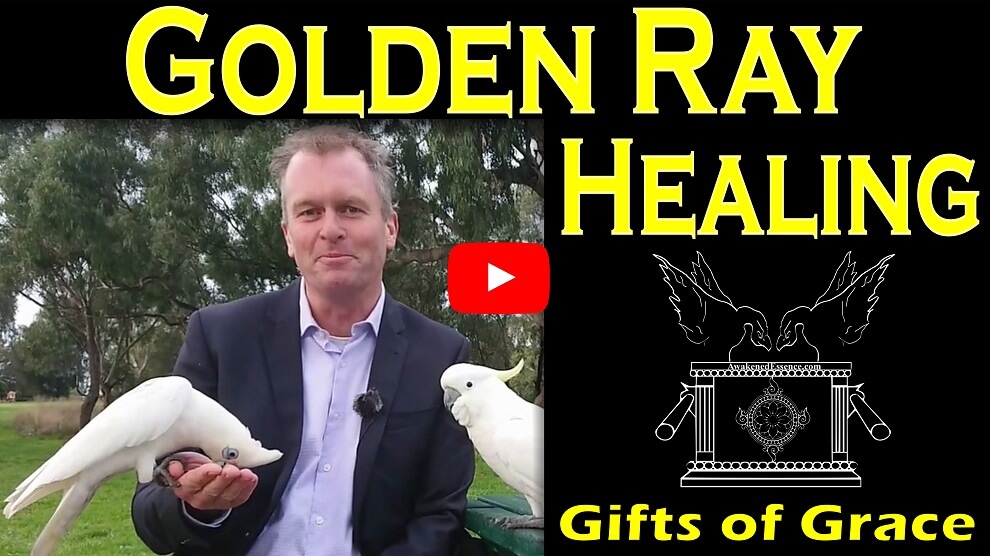 Online course and what you get

The most important aspects are the attunement and assigning a Guardian and Teacher of the Golden Ray. The course and attunement will give you everything you need for self-study and application. Some coaching is given as part of the course for feedback and questions.

If you practice and activate what is in the manual and videos you will activate it to the cellular level. The videos cover a day-long course of a Golden Ray workshop. Then extra videos are there to cover important aspects of the manual, practice healing, and meditations. You can then add Golden Ray into your daily activities, healings and, meditations.
Examine and evidence and see where it leads you.

The online course is geared to give as much as possible with no need to make it to a physical workshop. Personal healing sessions and mentoring for healers are other great ways to develop these healer skills.

Hear Gavin's remarkable experience with learning the Golden Ray Healer system. "Back from the brink with extreme pain caused by crushed vertebrae"... 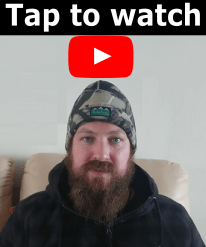 “The Golden Ray weekend was very powerful. I had a very full-on & profound healing on the second day! I found the soul bridge building exercise very powerful but also very manageable at the same time. While I am new to all this and this was advanced energy and Light work I was comfortable and felt safe and cared for at all levels”.

The Laws of Grace will apply

The unpredictability of Grace with Healing & Gold Ray use

The unpredictability of Grace is God's Will. This video speaks in general terms of what that means in the Awakening context. Over the years I have witnessed many profound and miracle level healings with myself and others I have worked with. 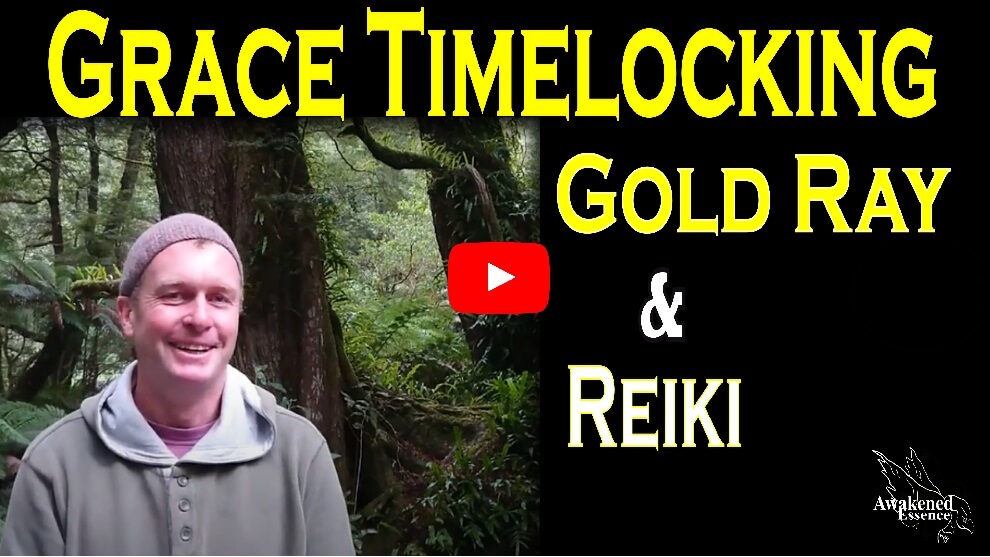 What I have noticed regarding esoteric/spiritual healing and the actions of Grace is:

Since late 2013 I have been given daily instruction for years on this system, and all related topics. Initially for the first 2 years instruction was given mostly by Archangel Metatron or Isis, sometimes Jesus. In that time I ran courses with students to level 2. The first 2 levels are for healers and spiritual aspirants who want to add the extra skills to healing and awakening.

Level 3 is a practitioner level to take this towards the second and deeper aspects of the Golden Ray being a mystery school. This means it works with the Laws of Grace in a deeper way to take the student into deeper levels of Awakening and healing abilities.

During this period I was taught how the Golden Ray system was used to train priests in handling the Ark of the Covenant in Egyptian and biblical times. I was shown how this relates to the Hindu teachings and their sacred symbols which are as old as the Vedas. I have been shown how to draw, activate and use these most sacred of all symbols.
Six years later all these teachings were externally confirmed by reading books on this subject. Per the validation process explained within the Laws of Grace course I had received these teachings and lived them for years before looking for information or teaching from outside sources. I had already validated this knowledge via the Rules of Evidence, Pillar No3 of this framework, before reading other people's teachings.

The Golden Ray touches and is imbibed by those of extremely high spiritual attainment. Adept and highly advanced spiritual masters such as Jesus Christ, Sri Sakthi Amma Narayani, Sri Aurobindo, and Sri Babaji (the immortal) attain with the assistance of the Golden Ray the Body of Golden Luster. This very high-level initiation allows the miraculous occurrences of cellular regeneration, physical regeneration, bi-location, and ascension to occur. While I discuss the second cycle of Enlightenment called the Transpersonal Level, the Body Of Golden Lustre is a much higher cycle and phase of Awakening.

It is time, as part of the Golden Age, for the Golden Ray (and others) to be anchored on and on this planet. This can only happen through incarnate humans. The Golden Ray is to be anchored from the highest dimensions to the center of the physical earth (our bodies, cells, and DNA) and back up again to the heavens.

This is the joining and merging of the masculine with the feminine, Shakti with the Shiva, Heaven with Earth. Thus it is time for people to learn, adjust to and use this divine energy for the betterment of all. As this energy is of the highest consciousness it will only allow that which is good for all to occur (including yourself). You will only be able to use this energy to the extent your Soul allows you. The extent your Soul is allowed to imbibe it under Divine Law, which is Grace: Thy Will.

This workshop / online course will introduce you to safely use a very potent, but intelligent healing energy. The Golden Ray has special properties that make it unique, safe, and “ego proof”. It is both a great alternative and a complementary companion, to Reiki. This course opens you to a wider bandwidth to work with the pure energies called the “Rays”.

At each level, you receive an attunement, an energy channel activation, and a symbol to use at both Level 1 and Level 2. The Level 2 symbol was given directly by Archangel Metatron, He and other Ascended Masters and Divine Deities have used this symbol widely in the past in ALL TRADITIONS and religions. They have taught me how the sacred symbols are all linked through the eons of time.

These Grand Beings that teach and guide us are just bursting to help you.

The below video was the 2021 Golden Ray video. The parrots play out Grace by their antics. Hearing this material a variety of ways helps understanding and new insights. 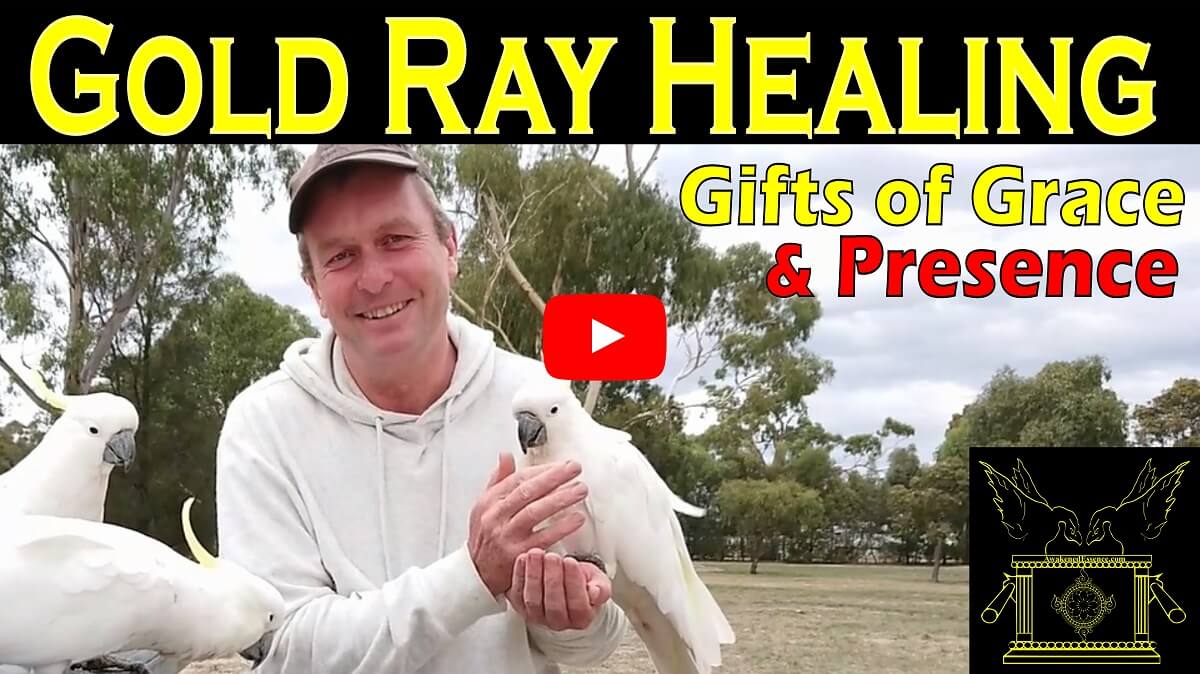 This is only a summary these topics are covered in more detail in the courses, coaching, or healing sessions. The Golden Ray encapsulates various essences of Rays 1 to 7 (the most commonly known), Rays 1 to 12, and Rays 1 to 144. The Gold Ray as I have been taught it makes it a Meta Ray. A Meta Ray is a Ray that can take on the qualities of other rays and also has a creation ability. This is why the Ark of the Covenant, and the two most powerful symbols in the Hindu tradition, the Wheel of Life and the Discus, have been taught as part of my initiation process.

The Golden Ray is a Ray of God and is All That Is. There are a number of different Rays, each having specific qualities. The Golden Ray is the One’s primary expression and exuberance for creation, regeneration, life force, and genesis level creativity (the originating idea, drive, and passion). The Golden Ray then has other secondary qualities such as protection, longevity, sealing, and forming permanent connections (etc).

As with other mystery schools teachings such as Alice Bailey’s Seven Rays, the Golden Ray is of similar nature. It is represented and managed by the spiritual hierarchy and Ascended Masters on behalf of planet Earth and humans who guide and love humanity unconditionally. This is noted in our language and culture with examples such as the golden temple, gold ring and gold prize. Gold is the original measurement of financial currency.

Ray, Light and Flame: The trinity of vibrational existence.
This is a very brief summary of the vibrational trinity that is part of the Golden Ray course. The Golden Ray is taught to encompass the full vibrational range. This gives extra benefits as each frequency range is good for certain tasks and functions. This is a complex subject so please excuse the brevity.

A Ray of God is the first “step down” in vibration before any form, sound, light, time or “space” exists. It is the first manifestation from the pure Void that was, and Is, God before any dimension, soul and before the universe was created. This is the famous bit in the bible "before the word", as a word requires time and space to exist as it is a vibration. Or as we know it more commonly these days as the nothing before the Big Bang. The Big Bang of course just popped out of nowhere, and this is very hard for a human brain to grasp how this could happen. The Void is pure potentiality.

The Ray is pure spirit that can take on consciousness, or as we like to term it our spirit or soul. After the Ray is created it can then be stepped down in vibration to create Light. This then gives us 'time and space' and the different dimensions where structure is possible. This is the entire basis for sacred geometry and physics as we know it.
Structure here is defined as the different types of time and "solidness" of objects. For example, the 5th dimension time is much more fluid and moveable as compared to the 3rd dimension where it is solid and time is linear (terribly complex to describe). Various structures exist in these different space-time dimensions for our Soul, which is born under a Ray, to incarnate at the lowest dimension of physical matter, the 3rd. This is why Phoenix healing can access all levels as it works at the Ray (thus Grace based) level down. This then explains why the Golden Ray healing system is a healing school that can lead to Awakening and Enlightenment.

If the vibration of light is further reduced we have a vibrational level known as the Flame. The Flame is the lowest vibration in this sacred trinity. The Flame affects physicality the most. A great example of this is trees convert light into sugar by photosynthesis. And the tree then uses that to grow leaves and wood. A flame can be used to burn the wood to turn the solid object that is "stored light" back into light. The most common flame used in spiritual healing and meditations is that of the Violet Flame and that is under the 7th Ray where humanities holder for that is Ascended Master St Germain.