The cornerstone distinction of being a human is free will. All other animals don't have this. Your conscious volitional attention is the basis of your free will. This can never be taken from you unless you are sleeping, knocked out, drugged or you have a severe psychological condition. 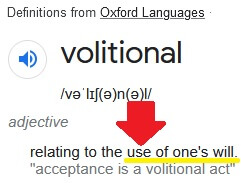 Hence pillar No1 is Correct Presence Practice is the foundation of real Enlightenment. To be aware of the Enlightened state requires the use of your volition so it is sensed and experienced. It is the action of your will to check that you are somewhere within the 4 steps of Correct Presence Practice. Applying this attention takes mental effort, motivation and desire. Yes, as one habituates the higher phases of Awakening the speed, instantaneousness, stability and durability of the process get faster. It also becomes visceral within your body as your neurology is activated and becomes capable of holding everything from fight-flight to the Divine yum-yum at the same time. 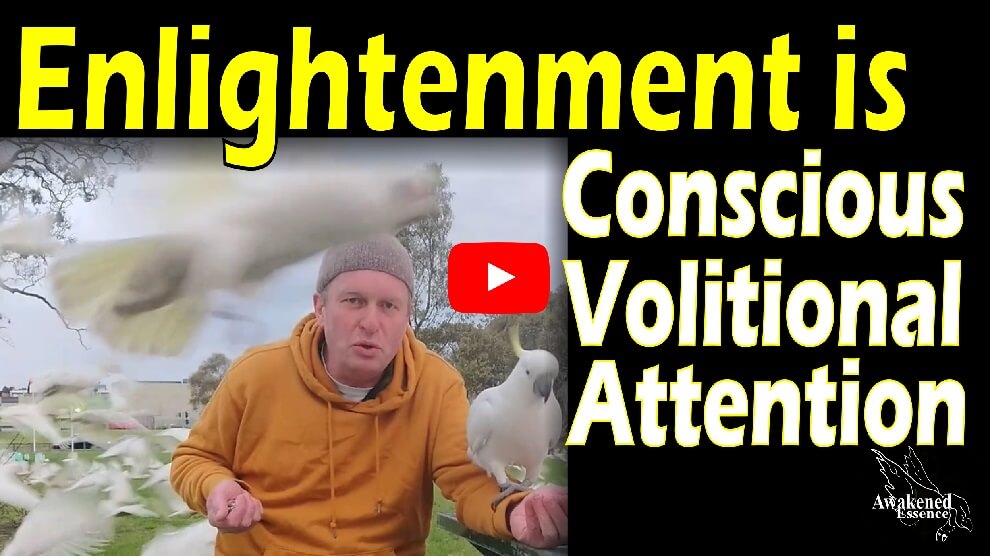 Beliefs and Mindful creation is delusional

The core reason Correct Presence Practice is so effective is it is based in your physical body. Preferably from the sternum, heart, and below. This enables the neurology to be activated. This also means one's awareness includes the heart and solar plexus brains (neural plexuses). Neuroscience has only recently been studying the 40,000 neurons found in the heart. The picture indicates their position in the Superior Vena, left and right Atrium indicated by the yellow dots. The impact of these neurons is massive as they were formed first in the womb before the cranial brain. 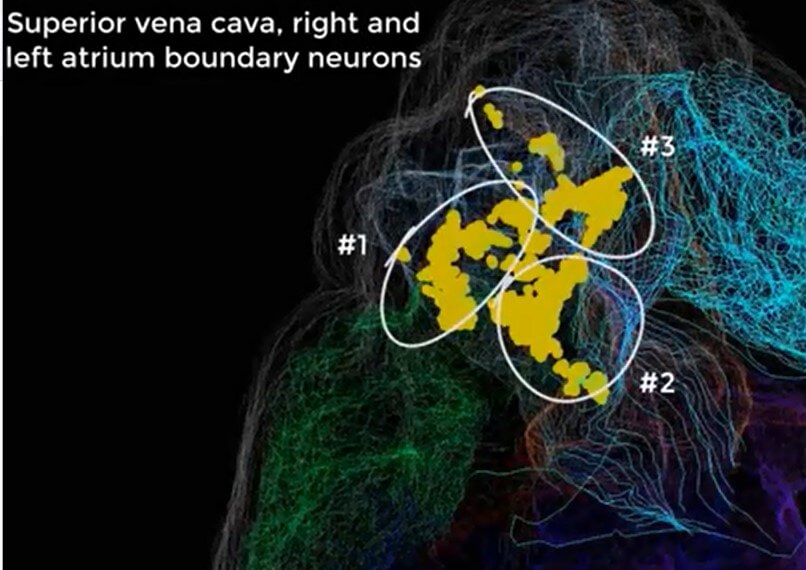 Therefore these heart neurons will likely contain many primal baseline memories as the fetus starts to grow. Unfortunately, this means they store traumas that are extremely difficult to shift. These neurons capture primarily our mother's unconscious modus operandi. Pillar No5 of the unconscious mind strikes again. This entire process is all 100% unconscious so once we reach age 7 and above and our ego is formed we then have our ugly base of garbage to work through. Hence the entire base of modern psychology revolves around our first seven years of life.

Working with the heart-brain is an advanced topic for coaching and the Mastery club. The heart-brain and videos discussing how to explore it are in the Mastery club for the group to research. Often the issues stored in there don't need to be addressed until one is in or beyond Abiding Awakening phase 3. This is a topic of ongoing research and observation by myself. As neuroscience has only just started to examine it, it means there is much we don't know about its impacts. Some ancient cultures do seem to have rituals and processes that involve the heart neurology and healing using that part of the body as a key.

Many teachers and students tout the path of nonduality. I've met many nonduality teachers that are certainly not up to or past phase 3 Abiding Awakening, as defined here on this website. This is blatant by their conduct, words and use of brainwashing vague language. These individuals are certainly not attentive as Presence when I have met them and they are teaching. These people are merely in phase 1 Got it Lost it of Awakening. Yes, some are certainly Blazing in phase 3 Abidance and beyond.

What is typical of many is they operate within a blind spot of mental reasoning that is plausible, and technically true (that is called a truism in Ericksonian hypnotherapy). The students attracted to non-duality tend to be strong in the mind, and thus reasoning is enough for them to be convinced. Yet the specifics are missing, especially when it comes to being grounded. Since they excuse the effort of using their volitional attention they don't activate their neurology or unconscious mind correctly. By default as they are non-doing their attention is not placed within the body. Thus correct Presence is thus impossible. If they do access step 4 the Nothingness there is a significant chance it is disembodied by them accessing higher esoteric structures.

Volitional attention placement into the body is needed to validate their neurology is within their field of consciousness. The lower body especially for those that have a western mind or people who think they have above average intelligence. Test it! If you are everything, then you are also aware or your feet, tummy and everything that is going on inside your body. One can then be aware of the nonphysical phenomenon. Yes, non-physical phenomenon which includes emotions, sense of space and the much-acclaimed 5th Dimension that the ascension people like to talk about.

Believing Eckhart Tolle memes and retorting "time does not exist" is clear evidence of a nondual misunderstanding. Yes, time does exist, in differing ways in the higher dimensions until one is at a high enough dimensional state where it does not exist. That's the place of the Nothingness, the noumenon that Wei Wu Wei and Ramesh Balsekar pointed at. Can you feel it as I describe it in step 4 of Presence Practice the Nothingness video? I do my best to describe it in many ways, and as I do so because my volitional attention is holding it the strength of it grows. I start getting drunk on Emptiness as it impacts my physical body with extreme yum-yum Divine bliss.

When one is experiencing step 4 of Correct Presence Practice it is indeed timeless and the nothing before phenomenon. This does impact the neurology so it can be sensed by your third dimensional physical body. This is why the 9 pillar framework makes it plain to understand so you do what counts if you are serious about real Enlightenment.

This is the point.... Why choose non-duality pointing to the moon when one can be defined and exact so the journey is certain? Then it becomes a visceral measured experience in life? Evidence from grounded experience compared conceptual pointing which is not your 3rd-dimensional reality. Thinking and plausible theory are not evidence, only experienced proof is.
I find it truly mindboggling why claimers tout their beliefs and never answer my requests for specificity and evidence. Pillar No8 blind spots explain why we do so. The individual is unconsciously incapable of being conscious enough to grasp what is required. They cannot provide evidence-based examples from their life. It's a human function for our psychology to believe nonsense as being plausible so our ego-identity does not feel threatened. The mind scrambles to understand something as our natural reaction to confusion is to seek clarity or give up and ignore it. The No5 Unconscious mind and its No1 prime directive of keeping you alive serves its purpose well. Simple neuroscience, though this protection mechanism is a major hindrance until it is dissolved through volitional awareness. This then builds the new correct habit until it becomes the default habit.

The power of No5 the unconscious mind and thus habit

Dimensions do exist, and they have their own laws with how they operate. When experienced enough one can know which dimensional level they are experiencing. This is why pillar No2 includes all of you and pillar No7a there is always more and No7b the structure (ie: the pillars) is more important than content. The Golden Ray Healing course includes esoteric subjects like sacred geometry, the different dimensions and things unseen like chakras and Merkabahs.

Again it comes down to experience (pillar No3 evidenced) and one's ability to enter these and know the differences. If you cannot explain it then you have not experienced it enough. If one claims they are 5th dimensional then they will be able to explain how time operates differently in the 5th dimension over the 4th and 3rd dimensional clock time. For those that claim they are 5th Dimensional: How can you be seen as a human by other humans if you are 5th Dimensional? 5D isn't visible in 3D wavelengths, that's science. This proves one needs to be grounded in 3D to experience 5D concurrently while alive in a physical body.

So why do many spiritual teachers teach ineffective, possibly incorrect or mind-dominated vague theory? The answer is simple. Most teachers typically follow pillar No5 the unconscious mind. It's just the habit of human nature to teach the system they Awoke under or to stay within the bounds of their culture. Yes, if they are really Enlightened they are still a human (pillar No7, it's the structure) even though they live in a better state of awareness. They could choose a clearer teaching that describes their experience, just most don't. Another complication is finances and typical seeker mentality. Most seekers are scared of pillar No4 Law Zero and few have the ingredient #1 What do you want motivation to face blind spots.

If I ever have the chance to sit next to Sadhguru Jaggi Vasudev again I'll ask him why he isn't teaching this clarity when He is certainly a Blazing Genius level Master who is beyond what I define here as phase 8 Matured Abiding Transpersonal Enlightenment.
He has been evidenced in a medical lab flat-lining the EEG and or ECG machines (the medical device that measures brainwaves and heart rates) when asked to close his eyes and meditate. That freaked the laboratory technicians as their training told them a flatline EEG or ECG means death. Most doctors or lab technicians don't understand deeper states of Enlightenment and its effect on the body. This event is discussed in a few of Sadhguru's YouTube videos on his channel. His teaching is clearly based on his Hindu and Indian culture with its rich ancient history of the great Awakened One's. Precision of structure and method is missing.

Prove Volitional Attention is a non-doing

Book an extended 1st coaching session for 90 minutes by tapping this link or call me for a free 25min chat if you have a question. My number is at the bottom of every page.

I've asked many hundreds of seekers and claimers how real Enlightenment is a non-Doing. I have yet to receive a credible answer that is not:

I'll pay you my current coaching session rate as we have a phone or Skype session. Anyone who can discount this fundamental human action is someone I want to hear from. Volitional attention is our basis of existence as a human. If validated I'll certainly need to re-write this 9 pillar framework and the Laws of Grace that is based on neuroscience and fundamental psychology. 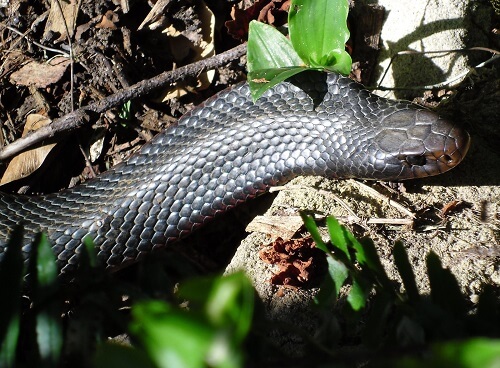 Then we can team up as decent teachers if you like and be in community to save this planet from the perils of human egoic greed. Then all life can co-habit in this Garden of Eden. Or I'll pay you for more coaching, as I'd seriously like a teacher who has knowledge and abilities to take me deeper.

That includes you Adyashanti, though you did turn me down in 2013 in Australia. I'm that chap that showed you the sunbathing red belly black snake. I'm sure you'll remember that little moment when I broke the 7 day silent retreat code and called you over. Yep, that's the exact snake pictured here.