All types of consciousness from the plants up fight to survive!

The ego, bad behaviours, emotional reactions, belief systems and the ego death is a process. Every aspect of your consciousness needs to transcend and 'Awaken' so it comes back to the whole of your consciousness. Each individual belief, reaction or behaviour fights to live. This 2017 legacy video beautifully explains this process. Then re-watch it and see how I reference the 9 pillar framework, 4 years before it was even created. 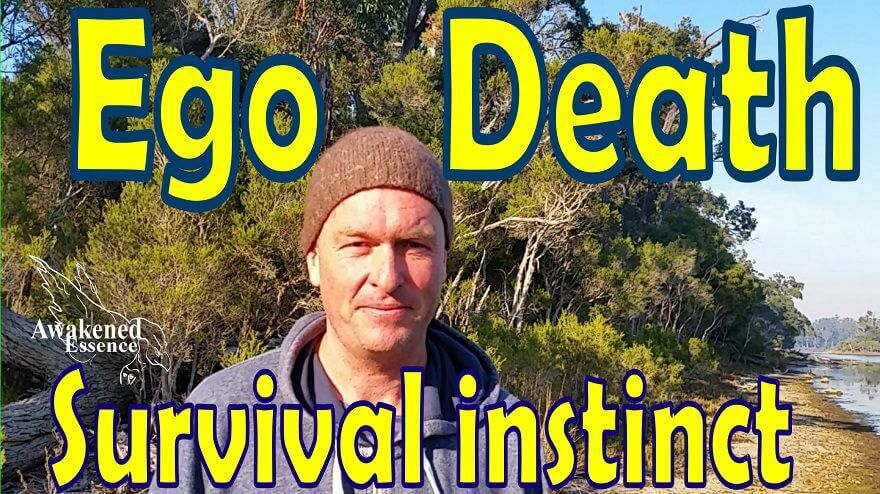 The irony of this is that your survival instinct, the Ego is all completely required. This is the role of your unconscious mind, pillar No5 in the framework. It gives you the ability to differentiate between "me" and other. Without this capacity you can't function. Hence why a newborn baby can't feed itself - it has no idea where its mouth is until it learns, 100% dependant on the carers.

In the second cycle of Enlightenment (phase 5 and above), which may happen well after normal Enlightenment (phase 4 permanent Abidance in Presence) has settled, one re-merges into the collective like the baby did. If you do not have a sound and solid Ego, personality, psychology you will go insane. It gives you the capacity to differentiate between what is yours and what isn't even though you are experiencing what the other or others are. Its is required to sense what is your thoughts versus the other that you are transpersonal with. It is required to keep you functional, as you are so comfortable with the Stillness, the Nothingness its too easy to lose a grip on reality. This cycle of Enlightenment presents new tough challenges. Grounding these in normal life is as much of a challenge as it was to be comfortable with Presence, your Nothingness.

It's good to be Enlightened to this level, but its also good to function like a competent human being. To function in society and be able to perform at a job (etc) while holding this Enlightened consciousness is extremely important. All this takes time to settle and grow. Laws of Grace and their operation mean you will not be allowed to hold these higher levels of consciousness until you come to terms with these sort of dynamics.

This is why it is easy to spot people who claim Enlightenment but it isn't actual, they don't have the human basics settled. Experiencing space, stillness and bliss in the mental bodies is not Abiding Enlightenment. Its a good start, but more Presence grounded in the body is required. Its just too unsafe and the psychology will unravel.

Take a look at Ramana Maharshi, he spent 13 years in a cave and had rodents eating him (so the legend goes). He was dysfunctional, and resistant to being a teacher or in society. Other Masters have also gone through this process. Thus the notion that ego is bad, and emotions are bad will merely slow you awakening.  You are both Presence and a human being, you need a healthy psychological mechanism that has been purposefully designed by the Divine. It has been done so these Enlightened levels of consciousness can be experienced in the 3rd dimension with a human body. Stop fighting it and learn how it operates.

Can you see how pillar No2, that Awakening includes all of you applies here? Keep this in mind when other spiritual seekers of teachers bag the ego as wrong or something to be killed. It can't be killed if you want to remain functional. Your job is to Awaken properly in a balanced fashion. Hence the Enlightenment framework and the Laws of Grace.

Yes, the ego is designed so you can handle Transpersonal Enlightenment!

What I have realized after 22 plus years of Inquiry, Presence practice, research and delving into the deep unconscious, is that all aspects of consciousness have individual consciousness and “fight to survive”.

Each bit of consciousness has the drive for survival and to perform its role. Just as a tree fights to survive as a tree, a caterpillar to be a caterpillar, so do aspects of your own psychology. This is why aspects of behaviour seem difficult to shift or change. They are doing what they can to survive even if you don’t like the behaviour and want it to stop.

Metaphorically the behaviour, feeling, or belief literally has its own independent life within you. Thus you cannot directly change or alter this by your own conscious volition in most circumstances. Hence the need for you to Inquire and be Present (in inner peace, the Stillness, the Awakened state) with these inner aspects until they dissolve into your integrated consciousness of the greater you.

The implications of this individual consciousness is profound. Even if the majority of the “conscious and unconscious you” is aligned to behave or feel a certain way, if there is an opposing aspect it can still assert its influence in your psyche. This is because it has its own survival instinct. This smaller aspect of your unconscious mind may still have the power to hijack your behaviour, thinking and feeling. Its ability to hijack you is related to which prime directives of your unconscious mind it is in alignment with.

Look at the people who are close to you. I bet you know their “buttons”. All you need to do is say something or behave in a certain way and they will change and fly into a predictable reaction. This is exactly what I am talking about. If you are observant enough you will know your own trigger buttons.
Each deeper layer of segmented consciousness will also have this ability. Thus your skills and being conscious and Present remains the key to dealing with these aspects of splintered consciousness.

I always keep this in mind when people tell me “I create my reality” – they indeed do as that includes the unconscious and subconscious splintered aspects that stop them from manifesting what they reckon they can manifest. Thus to truly “manifest” you need to be an adept at Inquiry and Presence, unless Grace (ie: God’s Will, which is not personal will) wants you to have it.

As you develop the skill and base of Correct Presence Practice these other splintered aspects of unconsciousness will still rise and behave as though they are completely separate from the peaceful you. Understanding this dynamic will assist both the conscious you and the unconscious material to deepen in your peace. This will also help with re-integration of the splintered aspect of your unconsciousness. This will still happen even when you are in the Abiding Awareness stage of Awakening and this will still seem odd, as you know Who You Are! But you will hear me state in this website and videos, it's all about the structure - not the badges of attainment.

Contemplate this deeply. When this fact is deeply understood it is truly profound.
If something in your life is stuck and won't move this is why. If you want assistance to shift this, book a coaching session.

And yes; like all pictures in my website this a photo I took of the rather deadly Alpine Copperhead. This beautiful snake had just had a swim in the Bemm River and it didn't seem bothered by close human company.

Personal Sessions offer the greatest level of insight and change. It simply cannot be beaten. Any topic and any service offered in this website be that Awakening coaching or healing services. Smash your Blind-Spots and tendancies that keep you stuck. This makes it real and specific to you.
Book a free 25 min phone chat when you send a booking email with the required information. Alternatively your initial 50 minute* Skype/phone call will be extended to 90 minutes.